Thy Antichrist is one of the most famous South American Black Metal bands, proudly standing in line with Sarcofago, Holocausto and Inquisition. Thy Antichrist are an amalgamation of melodic but heavy and haunting Black Metal, Nietzsche and the spirit of Andres’s Colombian ancestors. The result is captivating and deserves more recognition than they currently get. For people wanting to give their music a go I recommend their last album “Wrath of the Beast” from 2018 or my personal favourite, the 2008 split Escupiendo las cenizas de Cristo / Human Pandemonium with fellow Colombian band Infernal. It was absolutely worth it to see them live three times in two countries during their first European tour in 2019 and so I just had to get singer Andres Vargas to give an interview for DarkArt to introduce the band and the concept behind it to a wider audience.

What was your introduction to Black Metal?

I’ve been listening to classic Metal and rock since the age of 15 years old and later I was introduced to Black Metal during the first wave of Scandinavian Black Metal in the early 90’s.

How did Thy Antichrist come into existence?

It was an early attraction for art, music and philosophy in my teenage years. I was under 18 years old when I created Thy Antichrist in Medellin, Colombia, South America. So it has been a long ride since then.

How did you get the idea to make music about Nietzsche?

I read a lot of classic literature, books and writers at that time and Nietzsche caught my attention with his vision and ideas about the world, human behavior and the criticism about the moralistic and religious aspects in the 19th century.

Did you always have such an elaborate corpsepaint? How did it change over the years?

It has been a developing process which I’ve been improving with time and it makes nowadays the brand signature of Thy Antichrist performance. It has been mainly inspired by the chamanistic roots of my Latin American ancestors who used body paint as their way to get in touch with nature during ritualistic trances. 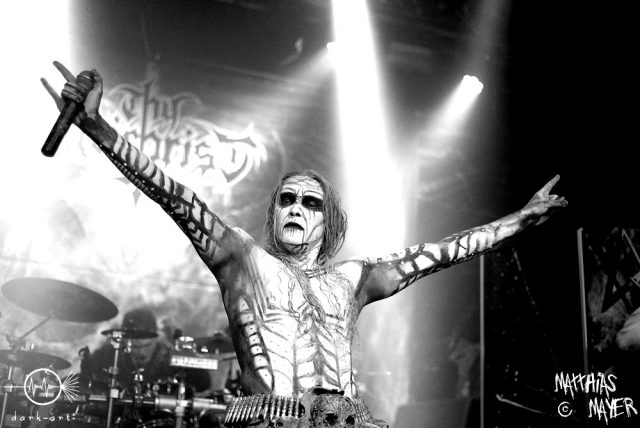 Why do you think corpsepaint has such an important part in black metal?

It’s the way it was conceived Black Metal in the early 90’s. Music, mysticism and the visual aspects makes what is Black Metal an unique genre into Metal.

You incorporate satanism in your lyrics. Why did you decide to do that? Is that your personal belief as well?

Satan or satanism are simply words that can relate to a lot of meanings, misunderstandings or different conceptual approaches. For me it’s a lifestyle ruled by common sense and the responsibility for my actions as a human being. It’s freedom of speech, spiritual endeavors and respect for the people with other ways of thinking.

The 2019 extended tour with Thy Antichrist across Europe supporting Carach Angren and Wolfheart was the first one in 20 years, how was it?

It has been a remarkable experience for me and my band. As you say, it took me 20 years to step foot on European soil. We had a great experience visiting so many cities, countries, friends and fans for the first time.

Are there any plans to tour Europe again? Do you have any words for your European fans?

Hopefully we can come back soon after this crazy and pandemic nightmare is over. I really appreciate all the support we’ve received from our European friends. Can’t wait to be back!

Can you tell us anything about the new Thy Antichrist album? Is there already a release date?

We’re taking advantage we’re not touring due to the pandemic restrictions to live music, so we’re working on the new album which it’ll be 9 tracks with over 50 min of new music. I hope it can be released sometime during 2021.